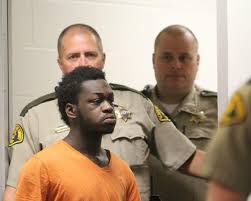 Cedar Rapids police said Tuesday the 18-year-old male remained in custody but would not yet release his name or the charges against him.

The robbery was reported a little after 3:30 p.m. Monday in a parking lot at Kennedy High School. The 18-year-old student was nearing her vehicle when confronted by the robber.

Police say he displayed a handgun and took only her cellphone. She was not injured.